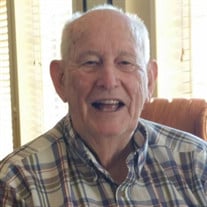 Funeral services for A D Taylor, 86, of Gilmer formally of Mt. Pleasant will be held 10 a.m. Tuesday, June 20, 2017 at The Church of Jesus Christ of Latter-Day Saints with Bishop Peter Sullivan presiding. Interment will follow at Kelsey Cemetery. The family will receive friends from 6-8p.m. Monday, June 19, 2017 at the funeral home. Services are under the direction of McWhorter Funeral Home. Mr. Taylor was born Aug. 1, 1930, at the family farm in Cass County, Texas, the ninth of 10 children, to Andy Dixon Taylor and Laura Lee Carter Taylor and passed away on June 15 after a sudden illness. He attended Hughes Springs schools before going to Sam Houston State University, where he earned his first degree in agriculture. Mr. Taylor was an educator with Mt. Pleasant Independent School District for nearly 30 years. A teacher at heart, he felt the calling to be an administrator, so while working full-time to support his family, he earned his master’s degree in education administration. As a teacher, coach and administrator, he worked with students of all ages, and he loved every single one. He was serving as principal of Vivian Fowler Elementary when he retired. He was active in school district activities and was the voice of Tiger football for about 20 years. Mr. Taylor was a member of The Church of Jesus Christ of Latter-day Saints, where he served as a bishop. He especially loved being a home teacher. He was also proud to be a veteran; he served as a member of the U.S. Air Force during the Korean Conflict. He married the love of his life, Jean Chevalier, on November 23, 1955. The Taylors moved to Mt. Pleasant in 1960 and remained there until moving to Gilmer in 2016. Mr. Taylor loved his family and was devoted to his immediate and extended family. In addition to Jean, he is survived by two children, Jan Taylor of Fort Worth and Randy (Teri) Taylor of Klamath Falls, Oregon; one brother, Wesley (Doretta) Taylor of Nacogdoches, Texas; one brother-in-law, Azell (Patricia) Chevalier of Gilmer, Texas; and one sister-in-law, Thurza Blackshear of Carriere, Mississippi. Other survivors include grandchildren Erica (Tom) Jackman of Salem, Oregon; Kara Taylor of Denver, Colorado; Chase Taylor (Makay) of Eagle Mountain, Utah; Carly Taylor of Salt Lake City; Kelly (Jordan) Zabriskie, also of Sandy; and Shania Leeper-Blue of Klamath Falls, Oregon. He is also survived by three great-grandchildren: Harper, Jonah and August Jackman of Salem, Oregon, as well as a host of nieces and nephews. In lieu of flowers, please consider contributions to the Kelsey Cemetery or the Shelton-Rankin Cemetery. Please visit A D’s on-line registration book at www.mcwhorterfh.com to leave a memory for the family.

Funeral services for A D Taylor, 86, of Gilmer formally of Mt. Pleasant will be held 10 a.m. Tuesday, June 20, 2017 at The Church of Jesus Christ of Latter-Day Saints with Bishop Peter Sullivan presiding. Interment will follow at Kelsey Cemetery.... View Obituary & Service Information

The family of Mr. A D Taylor created this Life Tributes page to make it easy to share your memories.

Funeral services for A D Taylor, 86, of Gilmer formally of Mt....

Send flowers to the Taylor family.