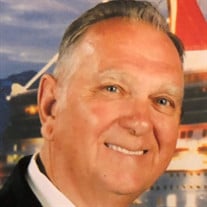 Funeral services for Allen Dale McKendrick, 82, of Kelsey, Texas are scheduled for 11:00 am, Friday, July 17, 2020 in the chapel of McWhorter Funeral Home with Dennis Means, conducting. The family will receive friends at 10:00 am prior to the service. Interment will be held at Kelsey Cemetery. There will be open viewing Thursday, July 16, from 2:00 pm – 5:00 pm. Arrangements are under the direction of McWhorter Funeral Home. Dale was born June 25, 1938 in Dewar, Oklahoma, to James Edward McKendrick and Viola Mozell Reese McKendrick and passed from this life July 10, 2020 with his family by his side. Dale proudly served his country in the United States Navy from 1956-1962. While in the service Dale met and married Elaine Rita, August 20, 1959 in Azusa, California. They had two children and later adopted a third child. After the passing of Elaine, Dale met and married Carol Sue Wade, December 15, 1992, in Gilmer, Texas. He was a building official for over 30 years. He was the great grandchild of John Edgar, founder of Kelsey, Texas, 1898. Dale was a member of The Church of Jesus Christ of Latter-Day Saints. Those to cherish his memory are his wife, Sue McKendrick; children, Dale R. McKendrick, Lorrain McKendrick, Cecelia Camacho, Jeffrey Engemann, Stephanie Murphy, Meridith Bunn, Jennifer Barton, Jason Engemann; 21 grandchildren and 5 great grandchildren. He is preceded in death by his parents, his brothers and his sister. Pallbearers will be Dale R. McKendrick, Jason Engemann, Devin McKendrick, Brett McKendrick, Brandon Murphy, Daniel Murphy, Spencer Murphy, Tanner Engemann, Ricky Almaraz, Nick McCracken, Jacob Wright. Honorary pallbearers will be Jeffrey Engemann, Brian Barton, Doug Murphy, Paul Murphy, Jimmy Bunn and Dan May. Memorial donations may be made to Hearts Way Hospice of Northeast Texas, P.O. Box 5608, Longview, Texas 75608 or www.heartswayhospice.org. Please visit Dale’s on-line registration book at www.mcwhorterfh.com to leave a memory for the family.

Funeral services for Allen Dale McKendrick, 82, of Kelsey, Texas are scheduled for 11:00 am, Friday, July 17, 2020 in the chapel of McWhorter Funeral Home with Dennis Means, conducting. The family will receive friends at 10:00 am prior to the... View Obituary & Service Information

The family of Mr. Allen Dale McKendrick created this Life Tributes page to make it easy to share your memories.

Send flowers to the McKendrick family.