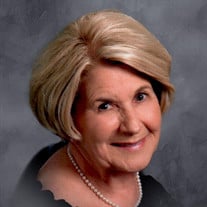 Funeral services for Betty “Bet” Connally, 84, of Gilmer, are scheduled for 10:00 am, Wednesday, August 25, 2021, at First Baptist Church with Bro. Mike Kessler officiating. Interment to follow at Sunset Memorial Park. Arrangements are under the direction of McWhorter Funeral Home. Bet was born January 13, 1937, in Gilmer, Texas to Perry and Christine Loftis Connally and passed from this life August 22, 2021, in Longview, Texas. Those left to cherish her memory are her son, Scott Sisson and his wife, Angelica; daughters, Kelly McQueen and her husband, David, and Leslie Goudarzi; sisters, Lillian Dalton and Faye Nell Parsons; brother, Jim Connally; grandchildren, Taylor McQueen, Jackson McQueen and wife, Jocelyne, Dain Goudarzi, Zoe Goudarzi, Carlos Aguilar, and Melanie Aguilar. She is preceded in death by her parents; and by her sister, Mary Ellen Hallberg. Bet was a lifetime resident of Gilmer and a 1955 graduate of Gilmer High School. She served as a Kilgore Rangerette from 1955-56. Bet worked as a legal secretary until her retirement in 2012. She was a member of the First Baptist Church of Gilmer where she served as a first grade Sunday school teacher and as secretary for the First Place Sunday school class. Her hobbies included playing bridge with her Monday Night Bridge Group of which she was a member for over 50 years. She loved her family and enjoyed spending time with them and especially her grandchildren. Pallbearers are Larry Cowan, Pete Herrmann, Steve Stewart, Steve Sansom, David Skinner, and Jim Marshall. Honorary pallbearers are Brent Goudarzi, Ken Loyd, Kenneth Stewart, Kenneth White, Robbie Bruns, and Bill Marshall. Please visit Bet’s on-line registration book at www.mcwhorterfh.com to leave a memory for the family.

The family of Betty "Bet" Connally created this Life Tributes page to make it easy to share your memories.

Funeral services for Betty “Bet” Connally, 84, of Gilmer, are...

Send flowers to the Connally family.