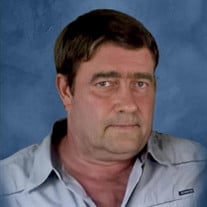 Funeral Services for David Alan Henkle, 62, of Big Sandy, will be held at 2:00 pm, Saturday, November 27, 2021, in the Chapel of McWhorter Funeral Home with Bro. James Gray officiating. Interment to follow at New Hope Cemetery. The family will receive friends at 1:00 pm prior to the service. David was born September 19, 1959 to Jerry and Sally Henkle, in Berea, Ohio and passed to his heavenly home November 26, 2021 at his home in Big Sandy, Texas. He was surrounded by his closest loved ones for the last week of his life. David was a man of many skills. He worked hard to not only provide but also to make a nice life for his family. After moving to East Texas from Plano, he worked for his Father in Law at Cook’s Paint & Body. He had his own plumbing business for several years before becoming a painter. Finally, he opened an auto repair shop, Cars Unlimited in Big Sandy, where he worked until his retirement in 2015. Those left to cherish his memory are his son, James Alan Henkle of Big Sandy; daughter and son in law, Mallary Kay and Clint Johnson of Big Sandy; three grandchildren, Carson James Henkle, Casie Jayde Henkle, and Aria Kay Johnson; twin Brother, Donald James Henkle; mother of his children and friend, Melinda Akins; mother in Law, Betty Cook; brother in law, Mac Cook; and several cousins, nieces, nephews and many friends. He was preceded in death by his parents, grandparents and sister. Pallbearers are Marvin Cook, Landon Cook, Dillon Cook, Alex Cook, Garland Harroff, Jordan Peri, and Andrew Peri. Honorary pallbearers are Mac Cook, Robert Fitzgerald, Carson Henkle, Andy Peri, Jay Fuller, Howard Fitzgerald, Allen McQueen, Bob McCasland, Gary Rich, and Tom Irwin. Please visit David’s on-line registration book at www.mcwhorterfh.com to leave a memory for the family.

Funeral Services for David Alan Henkle, 62, of Big Sandy, will be held at 2:00 pm, Saturday, November 27, 2021, in the Chapel of McWhorter Funeral Home with Bro. James Gray officiating. Interment to follow at New Hope Cemetery. The family will... View Obituary & Service Information

The family of David Alan Henkle created this Life Tributes page to make it easy to share your memories.

Funeral Services for David Alan Henkle, 62, of Big Sandy, will...

Send flowers to the Henkle family.