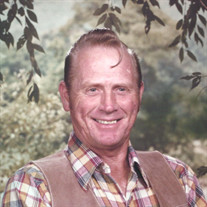 James Scott Green, 87, of Gilmer, was born August 1, 1931, in Freeport, Texas to Leon and Ada Green. He passed away in his home on March 30, 2019 after a brief illness. He married his loving wife, Flo Blackstone Green, on February 2, 1963, and together they raised four children. He owned and operated a dairy in Kelsey for 54 years and then had beef cattle. He went to work the morning he broke his leg. He was a hard worker and strove for success in every endeavor. Scott served in the U. S. Air Force from 1950-1954. Scott is survived by his wife, Flo Green; sons, Russell Patton Green and Thomas Scott Green; daughter, Carol Green Moncada and great-grandson Mariano Perez; 9 grandchildren, Jennifer Hendry, Kelly Stapleton, Ashley Sides, Stephanie Roadcap, Jana Glass, Jennie Cassel, Amanda Goodwin, Crystal Taylor and Thomas Green; and 21 great grandchildren . He is also survied by his sister-in-laws, Joy Marsh and Edna Hester and brother-in-laws, Pat Blackstone, Roland Lambert and Milton Ezell. He is preceded in death by his parents, Leon and Ada Green; brothers, Russell and George Green; sisters, Donna Keplinger, Genevieve Bryant and by an infant sister; his first wife, Mary Green and infant son, James William Scott Green, Jr.; sister-in-laws, Imogene Green and Gay Lambert; and brother-in-laws; Lawrence Bryant and Bobby Marsh. He employed Jose Agundis for 22 years and he was his right hand man. Scott will be missed by his family whom he loved very much. He never quit giving loving advice to them all. The family wishes to express their gratitude to the caregivers at Traditions Hospice, as well as to sitters, Deanna Townsend, Patricia Ray and Claire Samples. The family also wishes to acknowledge their neighbors and dear friends, Alpheaus Shirley, and his wife, Carla, who helped to ease the pain of Scotts passing. Memorial visitation will be held Sunday, April 14, 2019, 2:00 pm until 5:00 pm, at McWhorter Funeral Home. A private family burial of his cremains will be held at a later date. Please visit Scott’s on-line registration book at www.mcwhorterfh.com to leave a memory for the family.

The family of James Scott Green created this Life Tributes page to make it easy to share your memories.

Send flowers to the Green family.