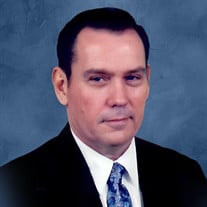 James Charles Summerville passed from this earthly life to his heavenly home on October 25, 2021. A Memorial Service in celebration of his life will be conducted at McWhorter Funeral Home, Saturday, October 30, 2021, at 5:00 PM with Reverend Deacon Bill Necessary officiating. Family will receive friends an hour prior to the service. Charles, as he was called by his family was born on March 11, 1941, in Little Rock, Arkansas to James S. and Jessie Noble Summerville. He married Clara Lora Thornton on August 17, 1964, and they celebrated more than 57 years of life together. During his senior year he enlisted in the Air National Guard, and he later served in the ROTC while attending college in Arkadelphia, Arkansas. He enlisted in the Navy in 1960 and served his country for six years. Charles spent most of his adult life working in the airline industry. He had a passion for motorcycles and enjoyed attending rallies and riding with the Patriot Guard. He also had a passion for music, playing for various churches, loved old hymns and country music. He loved golf and working on different projects in his shop. Charles was preceded in death by his parents, two younger sisters, a brother and multiple family including aunts, uncles, and cousins. He is survived by wife, Clara Summerville; three children, Connie Summerville Gensamer and husband Joe, Chris Summerville, and Jason Summerville, Sr. and wife Shelly; nine grandchildren Lora, Heather, and Nico Melone; Nichole, Camren, Brooke and Jesse Summerville; Jason Summerville, Jr. and wife, Ashton, and Megan Summerville; and four great grandchildren Hayden and Taylor Blythe, Ava Summerville and Rhett Summerville; sisters Karen Johnson, Sharon Johnson Merritt and husband Bill, and Starlyn Whatley; brother Samuel Summerville and wife, Ann; and many other family and friends. Please visit James’ on-line registration book at www.mcwhorterfh.com to leave a memory for the family.

James Charles Summerville passed from this earthly life to his heavenly home on October 25, 2021. A Memorial Service in celebration of his life will be conducted at McWhorter Funeral Home, Saturday, October 30, 2021, at 5:00 PM with Reverend... View Obituary & Service Information

The family of James Charles Summerville created this Life Tributes page to make it easy to share your memories.

James Charles Summerville passed from this earthly life to his...

Send flowers to the Summerville family.