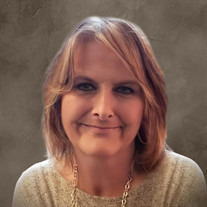 Memorial Services for Jeanetta Rose Stewart, 56, of Gladewater, will be held at 11:00 am, Saturday, January 8, 2022, at McWhorter Funeral Home. Jeanetta was born November 1, 1965, in Galion, Ohio, to Van Edward Mollett and Vassa Lou Johnson and passed from this life, December 20, 2021. She was a loving, devoted mother and mamaw to her children and grandchildren. Those left to cherish her memory are her boyfriend, Rik Ramirez; daughter, Brittany Stewart and her boyfriend, Beau Hicks; son, Michael Stewart and his wife, Brandy Stewart; sisters, Barbara Perdue, Brenda Hodges, Ruby Lewis, and Tina High; and her grandchildren, Christian Ramirez, Madden Ramirez, and Mason Hicks. She is preceded in death by her parents, Van Mollett and Vassa High. Please visit Jeanetta’s on-line registration book at www.mcwhorterfh.com to leave a memory for the family.

The family of Jeanetta Rose Stewart created this Life Tributes page to make it easy to share your memories.

Send flowers to the Stewart family.