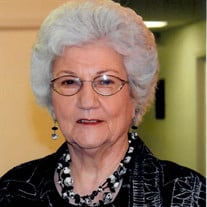 Funeral services for Joanna Ray, 85, of Gilmer will be held 10a.m. Thursday, August 2, 2018 at Enon Baptist Church with Bro. Ray Thompson officiating. Interment will follow at Enon Cemetery. The family will receive friends from 6-8p.m. Wednesday, August 1, 2018 at McWhorter Funeral Home. Joanna Fountain Ray was born September 17,1932, first girl and fourth child of Jessie Leon and Lillie Sanders Fountain. Born in Gilmer, Texas she attended schools in Union Ridge, and graduated in 1950 from Grand Saline High School. She was very athletic and loved sports of all kinds. She was an accomplished softball pitcher and played volleyball even as an adult. Joanna was a high school majorette and FFA Sweetheart. Joanna was a member of Enon Baptist Church, Gilmer, Texas, for the past 51 years. She was active in WMA, lead bible study groups, teacher, hospitality and was known for her cooking. She grew up singing with her father as a young girl, then with her son, Scott, in recent years. She was known all over for her beautiful alto voice. On June 10, 1950 she married Glynn Dell “Buck” Ray in Gilmer, Texas and recently celebrated their 68th wedding anniversary. They lived in the Enon Community 51 of these years after moving from the FT. Worth area. Their lasting tribute of love and marriage as God set forth, is an example not only for their family, but all who knew them. They had cattle, gardens, a beautiful home and worked beside each other daily. Joanna worked for 15 years at Gilmer ISD as lunchroom supervisor. She was instrumental in the design and building of two cafeterias in the Gilmer School System. She retired in 1981 to become full time wife, mother, and especially grandmother. She made beautiful homemade quilts and each grandchild was given one designed and sewn for them with love. Games were a big part of Joanna’s pleasurable times whether it Canasta at the Enon Community center or with family. Her brothers and sisters looked forward to their family competition of cards or just “silly” games. She was a talented seamstress also sewing lots of these and Debbie’s clothes, with even “Mother and Daughter” Easter dresses. Joanna is survived by her husband “Buck” Glynn Dell Ray, daughter and husband, Debbie and James Murphy, son and wife, Scott and Lisa Ray. Five grandchildren, Chad and Danny Murphy, Tara McNeel, Ginger Helpenstill, Stephanie McNeel. Eighteen Great-Grandchildren, Kaitlyn, Kamryn, Drew, Cameron, Hunter, Carson, Ryann, Sean, Gabbie, Brett, Rylee, Rustin, Evie, Lillie, Kinley, Kambry, Charlie and Maddie. Brother, Jimmie Fountain, and sisters, Billie Faye Jackson and Betty Bumgardner. Greeting her in heaven are her parents, Leon and Lillie Fountain. Brothers, Cecil and L.J. Fountain and sister, Marzee Springer. She will be missed, but her legacy will live on.

The family of Mrs. Joanna Ray created this Life Tributes page to make it easy to share your memories.

Send flowers to the Ray family.