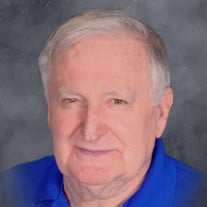 John Wayne Cox was born August 15, 1942 in Gilmer, to Johnnie and Faye Cox and passed away Sunday, December 27 at UTHC. He grew up going to Glade Creek Missionary Baptist Church, and accepted the Lord as his Savior at an early age. He later became a member of Friendship Baptist Church, Gladewater, and then joined First Baptist Church, Gladewater. At the time of his death he was a member of First Baptist Church, Gladewater, but was enjoying listening to a dear friend and former pastor at First Baptist Church, Overton online every morning and worship service on Sunday. John attended Mings Chapel Elementary through the 8th grade and was a 1960 graduate of Union Grove High School, where he loved playing baseball and football. He worked at Rob Roy in Gilmer, Delta Drilling Company, Spencer Harris and Norris Cylinder Company. He lived in Gladewater from 1969 until his death. He is survived by his wife, the love of his life, Mattie Frances Meadows Cox, and his son, Gary Wayne Cox, of Gladewater. One brother, Charles Edwin Cox and wife, Ruth, brothers-in-law, Jerry Long and Vic Vessakosol, sisters’ in-law, Lynda Meadows and Rita Cox, daughters’ in-law, Su Layne Cox and Lisa Cox, granddaughters, Jessica Scheck and husband, Jayrd, Grandville, Michigan, and Kayla Cox and Harrison Bodrie, Los Angeles, great-grandchildren, Jayna, Kensley, Maya, Everly, and Asher Scheck. Also surviving are nieces and nephews, Krista and Dr. Doug Hibbs, Timmy Vessakosol, Christopher & Rebecca Meadows, Jason Cox, Liana and David Niblett, Tisha Cox & Roger Ward, Brad & Emily Cox, Deana Cox, Ronnie & Melanie Cox, Amanda & Shannon Fleming, Kevin & Sandi Long, his best friend Bobby Yates & wife Sharon, and his beloved fur babies, Little Bit and Kitty, and lots of cousins. He was preceded in death by his parents, his sons, Kenneth Wayne Cox and John Wayne Cox, Jr., his in-laws, Floyd & Willia Mae Meadows, his brothers, Larry Gene Cox, and Rodger Dean Cox, his sister, Felita Long and his sister-in-law, Floy Jeanne Vessakosol and brother-in-law Charles Meadows, nephews & nieces: Tony Vessakosol and his wife Donnessa, Bryan Meadows, Dennis Cox, and Debbie Warren. John’s first date with Mattie Frances was for his sister’s wedding and two months later they were married. Their marriage lasted 51 years and they had celebrated their 50th anniversary in November of 2019. John loved working in the yard and had a green thumb. He loved mowing the yard, cutting the hedges and edging his yard and all the neighbors’ yards, growing trees and flowers. One of his greater accomplishments was growing grapefruit trees from seeds. One year one of his trees had 383 grapefruits and he enjoyed sharing them with all his friends. Another of his greatest loves was serving as Sunday School Director at Friendship Baptist Church and also First Baptist Gladewater. He loved people and he loved the Lord. He loved sending cards for birthday, sickness, absentees, and to welcome visitors. He could discuss any of the Bible with the best of people. He loved being a part of the Men’s Ministry at First Baptist Church with John Patrick and visiting the shut-ins. He loved working with the Pony League as a coach and president of the league. He loved baseball and football (especially the cowboys) whether playing or watching. He loved watching John Wayne movies, reading Louis Lamour books and his Bible. He also loved listening to his son Gary sing. John was a good man and a good friend. He just loved helping everyone. He loved his family and his pets. He loved his tools and could work on anything. When asked how he knew so much about fixing things, he would say “necessity”. Funeral services will be held at 2:00 pm, Saturday, January 2, 2021 in the Chapel of McWhorter Funeral Home. Interment will follow at Friendship Cemetery, Gladewater, Tx. The family will receive friends at 1:00 pm prior to the service. The family requests that masks be worn. Please visit John’s on-line registration book at www.mcwhorterfh.com to leave a memory for the family.

John Wayne Cox was born August 15, 1942 in Gilmer, to Johnnie and Faye Cox and passed away Sunday, December 27 at UTHC. He grew up going to Glade Creek Missionary Baptist Church, and accepted the Lord as his Savior at an early age. He later... View Obituary & Service Information

The family of John Wayne Cox created this Life Tributes page to make it easy to share your memories.

Send flowers to the Cox family.