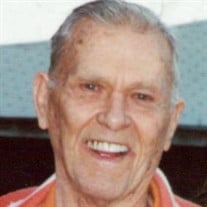 Graveside services for Mr. Joseph Madison Blount, 91, of Diana, Texas will be held 4:00 p.m. Monday, May 2, 2016 at the Gilmer City Cemetery with Mr. Phillip Williams officiating. The family will receive friends from 5:00 – 7:00 p.m. on Sunday, May 1, 2016 at McWhorter Funeral Home in Gilmer, Texas Mr. Blount was born on April 22, 1925 in Gilmer, Texas to Leslie and Pearl Blount and passed away Thursday April 28, 2016 in Gilmer Joe graduated from Gilmer High School in 1942 and was a member of the Gilmer Buckeyes football team. Joe enlisted in the Navy during World War II as a Hospital Corpsman serving a Marine Corps Batallion. After the war, Joe continued his education at the University of Texas in Austin where he played football for the Texas Longhorns along with Bobby Layne and Tom Landry. He earned a Bachelor’s of Science in Physiology. He was a football coach, beginning his career in Hughes Springs in 1948 and coaching at various East Texas schools until 1974. After coaching, he wrote football articles and human-interest stories for several newspapers as a feature writer. Joe wrote four books including two on nutrition and two on football: “Diary of a Fatphomaniac”, “Ten Thousand Food and Beverage Calories”, The Smorgasbord Offense” and “Football Texas Style”. Joe will be truly missed by all the loving family and friends he leaves behind. Joe is survived by three daughters and their spouses, Leslie and Leo Willeford, Lisa K. Blount, Sherri McFarland and Bryan Kelly; a daughter-in-law, Carole Blount; eight grandchildren: Holly Goddard, Lindy Blount, Jr., Kelly Blount, Woody Blount, Dustin Hollingsworth, Lyndsey McFarland, Ashley Foret and Brett Foret; six great-grandchildren: Parker and Brady Hollingsworth, Anna Kate, Allie and Brandt Goddard, and Maggie Blount. Joe is survived by his dearest long-time friend, Bonnie Faye Stewart. Mr. Blount is preceded in death by his parents and his only son, Dr. Linden V. Blount. Please visit Joe’s on-line register book at www.mcwhorterfh.com to leave a memory for the family.

The family of Mr. Joseph Madison Blount created this Life Tributes page to make it easy to share your memories.

Send flowers to the Blount family.