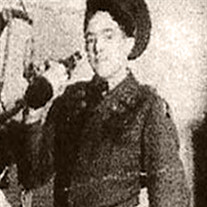 Graveside services with full military honors for Army PFC Junior Carl Evans will be held at 2:00 pm, Saturday, February 22, 2020 at Enon Cemetery, Gilmer, Texas. Visitation will be held 6:00 pm – 8:00 pm, Friday, February 21, 2020 at McWhorter Funeral Home, Gilmer, Texas. The Defense POW/MIA Accounting Agency announced that remains found in North Korea have been identified as an East Texas soldier who has been missing since 1950. (Source: Defense POW/MIA Accounting Agency) From the Defense POW/MIA Accounting Agency WASHINTGTON, D.C., Texas (News Release) - The Defense POW/MIA Accounting Agency (DPAA) announced today that Army PFC Junior C. Evans, 20, of Hall County, Texas, killed during the Korean War, was accounted for Aug. 7, 2019. In late 1950, Evans was a member of Company I, 3rd Battalion, 31st Infantry Regiment, 7th Infantry Division. He was reported missing in action on Dec. 12, 1950, in the vicinity of the Chosin Reservoir, North Korea. However, accurate accountability of troops was often difficult due to the chaotic environment and Evans likely went missing during a battle between Nov. 27 and Dec. 6, 1950. Following the battle, his remains could not be recovered. On July 27, 2018, following the summit between President Donald Trump and North Korean Supreme Leader Kim Jong-un in June 2018, North Korea turned over 55 boxes, purported to contain the remains of American service members killed during the Korean War. The remains arrived at Joint Base Pearl Harbor-Hickam, Hawaii on Aug. 1, 2018, and were subsequently accessioned into the DPAA laboratory for identification. To identify Evans’ remains, scientists from DPAA used anthropological analysis, as well as circumstantial and material evidence. Additionally, scientists from the Armed Forces Medical Examiner System used mitochondrial DNA (mtDNA) and autosomal DNA (auSTR) analysis. Evans’ name is recorded on the Courts of the Missing at the National Memorial Cemetery of the Pacific in Honolulu, along with the others who are missing from the Korean War. A rosette will be placed next to his name to indicate he has been accounted for. Junior Carl Evans was born January 13, 1930 in Hall County, Texas to Chester Carl Evans and Sara Ann Montgomery Evans. He will be laid to rest beside his sister, Patsy Evans Clark, who never gave up that he would be found and brought home. He is preceded in death by his parents; his siblings, Willie Evans, Louis Evans, George Evans, Patsy Evans Clark, Donnie Mae Evans, Buddy L. Evans, Mary Stone and Joy Henderson. He is survived by numerous nieces and nephews. Please visit PFC Junior Carl Evans’ on-line registration book at www.mcwhorterfh.com to leave a memory for the family.

The family of PFC Junior Carl Evans created this Life Tributes page to make it easy to share your memories.

Send flowers to the Evans family.