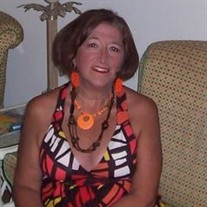 Memorial service for Kellie Jean Smith Richardson of the Pritchett Community will be held Wednesday, November 16, 2016 at 2:00 pm in the chapel of McWhorter Funeral Home with Kevin Powers officiating. Kellie was born December 17, 1958 to Jim and Glenda Smith in Longview and peacefully went to her Heavenly Father on Saturday, November 12, 2016 at her home. She was an amazing and loving wife, mother, and sister who touched so many lives and was loved dearly by all. Kellie graduated from Spring Hill High School in 1977 and continued her education at Kilgore College Nursing Department where she received her register nurse (RN) licenses in 1981. She worked as an RN around the East Texas region spending most of her career caring for newborns at Good Shepherd Medical Center nursery, as well as establishing a lactation practice for new moms. She continued her education at the University of Texas-Tyler where she received her Master’s in Nursing and was elected to the Alpha Chi National Honor Society Scholarship Society. Soon after receiving her Master’s in 2009, she began teaching at Kilgore College instructing future nurses until her retirement in May of 2016. During her childhood and teenage years, Kellie was involved in the 4-H club, band, and baton twirling. She was also very artistic and loved to paint which she turned into an avid hobby. Another hobby was family genealogies which lead to her membership into the Daughters of the American Revolution (DAR). Mrs. Richardson was preceded in death by her mother, Glenda Owens; stepfather, John Owens; mother-in-law, Annetta Richardson; maternal grandparents, Dewey and Carmen Pounds; parental grandparents, Wess and Lucille Smith. She is survived by her husband, Benny Ray Richardson; son, Nathan Richardson; two daughters, Shanna Daniel and husband Joshua; Kayla Richardson and husband Ryan; two grandkids, Connor and Kendra Richardson, father, James Smith and wife Paula; three sisters, Dena Mayfield and husband Rick, Mary Ann Tant and husband Chunk, also Sandra Thur and husband Marc; along with many nieces and nephews. Please visit Kellie’s on-line register book at www.mcwhorterfh.com to leave a memory for the family.

Memorial service for Kellie Jean Smith Richardson of the Pritchett Community will be held Wednesday, November 16, 2016 at 2:00 pm in the chapel of McWhorter Funeral Home with Kevin Powers officiating. Kellie was born December 17, 1958 to Jim... View Obituary & Service Information

The family of Mrs. Kellie Jean Smith Richardson created this Life Tributes page to make it easy to share your memories.

Memorial service for Kellie Jean Smith Richardson of the Pritchett...