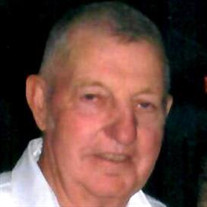 Funeral services for Neal W. McCurry, 84, of Bettie will be held 2p.m. Friday June 16, 2017 at McWhorter Funeral Home with Bro. Dicky Mauk and Bro. Wayne McKay officiating. Interment will follow at Oak Hill Cemetery. The family will receive friends from 6-8p.m. Thursday June 15, 2017 at the funeral home. Neal was born in Brumley, TX May 8, 1933 to Tom and Mary Massoletti McCurry. He went to Brumley School for about 6 years. Then his family moved into the East Mountain school district where he attended and graduated from high school. He had lots of friends, everyone at East Mountain loved Neal. Then in September of 1953 he met a school teacher who changed his life. She was Patsy Parish who had begun her teaching at Union Hill School. They married Dec. 23, 1955, built a house in Bettie, and lived there 63 years. Their son Marty was born in June 17, 1964 and their daughter Nela born June 6, 1966. To this family were added 5 grandchildren and 3 great-grandchildren. The grandchildren were Dylan, Meagan, Patrick, Madison, and Trevor, and the greats--Brinkley, Jaylen, and Brantley. Neal loved all of them very much. Neal was a hard worker. He began working for the Cox Family Enterprises when he was 15. He bought a house and provided for his mother at the age of 20. In 1956 Neal and Eulon Keel formed a partnership and began building houses around Gilmer. They built many houses in the area. In 1970 he ran for Commissioner Precinct 4 and won. He served four years. Then he went full time into the cattle and ranching business and loved every minute of it. He built up a large ranch that took many hours of work. Neal was a member of Oak Hill Baptist Church joining by letter. He was saved as a teenager in 1947. In 1960 he became a member of Bethesda Masonic Lodge and was a Lifetime member. He supported Union Hill School and was very active in helping in activities for the school. In 2000 he was voted citizen of the year by the school. Neal lived a good life to the fullest. He will be missed by his family and friends. If so desired in lieu of flowers please send donations in Neal’s name to St. Jude Children’s Hospital. Please visit Neal’s on-line registration book at www.mcwhorterfh.com to leave a memory for the family.

The family of Mr Neal McCurry created this Life Tributes page to make it easy to share your memories.

Funeral services for Neal W. McCurry, 84, of Bettie will be held...

Send flowers to the McCurry family.