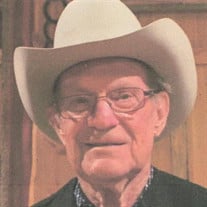 Paul Wayne Williams, Sr. met his savior, Jesus Christ, on Monday, June 24, 2019, peacefully at his home, PWillie Ranch in Simpsonville, Texas, under the care of his family and Hospice of Longview. Paul was the youngest and last surviving son of Mattie Williams and Paul Olen Williams, who was deceased at the time of Paul’s birthday on February 26, 1931. He is preceded in death by his parents, his brothers, Norman, Estelle, Leroy and Lavern and by his sisters, Willie Mae and Wanda. Paul is survived by his children, Paul Wayne Williams, Jr and wife, Martha, Ronald Byron Williams and wife, Sheila, Frances Ann Ashley and husband, Michael;and by his wife Jo Betsy McBride Williams; and by all the residents of PWillie Ranch in Simpsonville, Texas. He is also survived by grandchildren, Dwana White, Shannon Williams, Shelly Coleman, Ronald Byron Williams II, Nathan Scott Williams, Lowell Edwin Crowder, Billy Shawn Peterson, Tracy Lynn Peterson, Jason Christopher Ashley, Courtney Abshire, Dane Cartimiglia and Kyle Cartimiglia; 14 great grandchildren and 3 great-great grandchildren. Paul moved from his birthplace in Dimmitt, Texas to Wichita Falls, Texas with his family in 1935 where he attended grade school, junior high school and graduated from Wichita Falls High School in 1948. He worked at Modern Cleaners after high school and purchased the business in 1957. He ran this business and Duraclean Carpet and Upholstery Cleaning through his retirement in 1992. Paul married Billie Jo Jackson, in 1947, the mother of all three of his children. He attended Hillcrest Baptist Church with his family for many years. Paul enjoyed church softball in his younger days and took up golf in his retirement. In 2011, he moved with his family to Simpsonville in Northeast Texas, where the family established PWillie Ranch in his name sake. Memorial services will be held Saturday, July 6, 2019, at 11:00 am, at the Frontier Cowboy Church, Gilmer, Texas. Arrangements are under the direction of McWhorter Funeral Home.

Paul Wayne Williams, Sr. met his savior, Jesus Christ, on Monday, June 24, 2019, peacefully at his home, PWillie Ranch in Simpsonville, Texas, under the care of his family and Hospice of Longview. Paul was the youngest and last surviving son... View Obituary & Service Information

The family of Paul Wayne Williams Sr. created this Life Tributes page to make it easy to share your memories.

Send flowers to the Williams family.