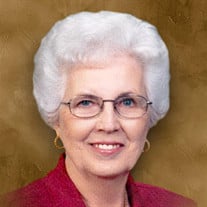 Pauline Roberts Harrison passed away peacefully to her eternal home at the age of 90. Services will be held at 2:00 pm, Saturday, August 10, 2019 in the chapel of McWhorter Funeral Home. Visitation will be held at 1:00 pm prior to the service. Private interment will be held at Sunset Memorial Park. Pauline was born on July 14, 1929 in Upshur County to Barnie and Myrtle Caldwell Roberts, both now deceased. She was married for sixty-three years to Charles Elwyn Harrison who passed away in 2010. Pauline will be remembered as a devoted wife, mother and grandmother. She served her Lord, family and friends well. Pauline was a member of several Baptist churches as she and her husband lived in several towns in Texas. Throughout the years, she served in many capacities using her organizational skills and master quilting skills to serve her Lord. After retirement, she and her husband returned to their East Texas roots and were faithful members of the First Baptist Church of Gilmer. During this time, she served as a member of the FBC Gilmer Piecemakers helping to make quilts for unwed mothers and to provide for other ministry needs. In 2013, she moved to be near her daughters where she became a member of the Deer Park First Baptist Church. Those she left behind to cherish wonderful memories include her three children, David (& Arlene) Harrison, Donna (& Ken) Hanson, and Neva (& Ernie) Howard; six grandsons, Daryl Hanson, John Harrison, Erik Hanson, Ty Harrison, Alton Howard and Daniel Howard; and 15 great grandchildren. Survivors also include brothers and sisters-in-law, Gerald & Mavinee Roberts, Charles & Bonnie Roberts, Ray & Janie Roberts and Wanda Stracener. In addition to her husband and parents, she was also preceded in death by three siblings, Grady Roberts, Jeffie Roberts Nix and Max Roberts. In lieu of flowers, please consider a donation to a charity of your choice or to the Texas Baptist Home for Children, 629 Farley St., Waxahachie, TX 75165. Please visit Pauline’s on-line registration book at www.mcwhorterfh.com to leave a memory for the family.

Pauline Roberts Harrison passed away peacefully to her eternal home at the age of 90. Services will be held at 2:00 pm, Saturday, August 10, 2019 in the chapel of McWhorter Funeral Home. Visitation will be held at 1:00 pm prior to the service.... View Obituary & Service Information

The family of Pauline Roberts Harrison created this Life Tributes page to make it easy to share your memories.

Pauline Roberts Harrison passed away peacefully to her eternal...

Send flowers to the Harrison family.