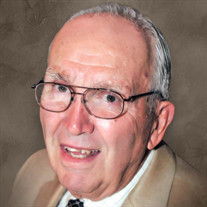 William ("Bill") Frost Patterson, beloved family man, community leader and man of faith, passed away on January 27, 2021, from complications arising from Parkinson's disease. Bill was born in Des Moines, Iowa, on December 10, 1932, to Bill and Perl Patterson. He moved to Waco, Texas, as a young boy and always thought of himself as a Texan. After graduating from Waco High, he attended Baylor University where he met his wife, Mary Ann Ragland. Their marriage was filled with love, affection, and joy for over 65 years. After serving two years in the Air Force, Bill and Mary Ann moved to Gilmer to build their life together. Bill worked in Marshall's department store for many years while growing his real estate and construction company. Through his lifetime, he designed and built over 250 residential homes and various commercial buildings in the Gilmer area, including the development of the Patterson Addition and Quail Run as home for many. Bill led a very active life with a focus on his family and friends. His passions included playing golf and cards, and traveling with family and friends. Highlights are a 50th Anniversary cruise with Mary Ann and all of his children and grandchildren, Baylor football and basketball games with numerous friends and family, and regular card games with Mary Ann, and Kenneth and Raye White. At Christmas, he used his wood-crafting skills to make puzzles and games to give his loved ones. Some of his favorite times were holiday gatherings with his family, or summer reunions and sporting events with extended family members. Embracing life in Gilmer, he passionately adopted Gilmer High School activities, becoming a life-long Buckeye backer and fan. He supported his children on the field and in the band, and continued to support teams as a season ticket holder and on frequent road trips for football playoff games. Bill was a devoted member and Deacon of First Baptist Church and member of Rotary International. He was a long-standing supporter of the Gilmer Yamboree, happy to contribute to its celebration and charitable endeavors. Bill served as President of Gilmer Yamboree in 1976, and proudly watched 9 grandchildren participate in later Queen's Pageants. He served many years with the Gilmer Industrial Foundation, helping the local business community grow. Bill served on the Board for Gilmer National Bank for 22 years and continued to provide support and guidance as an Honorary Director after his retirement. Bill is survived by his wife, Mary Ann, his children and their spouses, Tom and Jan Patterson, Elizabeth and Richard Pruitt, Bill and Diana Patterson, and Jim and Kathy Patterson, his grandchildren and their spouses, Chris and Samantha Mason, Evan and Ivy Patterson, Holly Mason, Marshall Patterson, Chess Patterson, Alex Patterson, Graham Patterson and Ally Patterson, as well as two great-grandchildren, Kacey Mason and Madelyn Mae Mason. Bill is also survived by his sister, Dolores Roberts, his brother, Tommy Patterson, and numerous nieces and nephews. Bill will be joining in heaven his grandchild, Will Patterson. There will be a private family grave site service. In lieu of flowers, please contribute to charities Bill held dear: the Mary Ann and W.F. (Bill) Patterson Endowed Scholarship Fund, Baylor University, One Bear Place #97050, Waco, Texas 76798-7050 (or online at www.baylor.edu/give - with notation of Featured gift in memory of William (Bill) Patterson); the Building Fund for First Baptist Church, 304 Buffalo Street, Gilmer, Texas 75644 (www.fbcgilmer.org); or a charity supporting research for Parkinson's disease.

The family of Mr. William "Bill" Patterson created this Life Tributes page to make it easy to share your memories.

Send flowers to the Patterson family.